Moderate exercise proven to be safe for fetus in last trimester 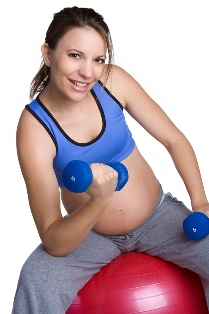 When it comes to exercise and pregnant women, alarms have consistently been raised regarding its overall safety, since it could potentially challenge the homeostasis of the maternal-fetal unit and consequently alter the course and outcome of the pregnancy. Of utmost concern is exercise during the final trimester, a period necessary in the maturation of the fetal lungs and other organs. While studies that have investigated certain effects of exercise on pregnant women do exist, they've failed to observe significant exercise-induced changes in umbilical perfusion (blood flow) or note any improvements due to decreased vascular resistance. Noting this, a study was conducted to assess the effects of maternal physical activity levels on fetal cardiovascular responses to acute exercise during the third pregnancy trimester. Results showed exercise to be safe as fetal conditions remained stable after regular physical activity was performed.

After recruiting healthy pregnant women between the ages of 25-35 who were not already exercising for more than 20 minutes/day more than three days/week, a total of 52 volunteers comprised the study group, which was subsequently split in half into a control group and an intervention group. The control group was instructed to maintain their regular level of physical activity for the study's duration, while those in the intervention group participated in three supervised training sessions/week from the start of the second trimester (weeks 12-13) to the end of pregnancy. Each relatively moderate exercise session consisted of a warm-up period of about 8 minutes, followed by about 20 minutes of circuit training with toning and light resistance exercises using barbells and resistance elastic bands, and concluded with an 8-minute cool-down period. Tests using a stationary bicycle were performed before, during, and after the study interval, which monitored maternal heart rate (HR) and fetal heart rate (FHR), and measured the blood flow velocity of the middle cerebral (MCA) and umbilical arteries (UA) of the fetus using an ultrasound recorder.

All findings point to safety for exercise during pregnancy

After results were compiled and compared, it was shown that most maternal characteristics were similar between both groups, though the resting HR was significantly lower in the intervention group, suggesting that expecting mothers who exercised adapted to the training. In regards to FHR, the mean value for both groups increased throughout exercise on the cycle in a similar fashion, meaning there was no significant difference detected as a result of the training. Finally, the UA blood flow increased in the exercise group and decreased in the control group, while the MCA blood flow decreased similarly in both groups, which is a normal and expected result of exercise. These findings show that maternal exercise does not produce any harmful effects on developing fetuses, and should therefore be deemed safe. The data presented here prove that the fetal cerebral circulation is well protected during maternal exercise at late pregnancy when the intensity level is low to moderate, and that maternal training status does not influence fetal cardiovascular responses. Further studies are needed to evaluate training at more intense levels, but pregnant mothers should view this as an OK to exercise at low to moderate levels at any stage in their pregnancy, particularly the final trimester, which is considered to be the most vulnerable.

-As reported in the Sept. 14, '09 edition of the British Journal of Sports Medicine