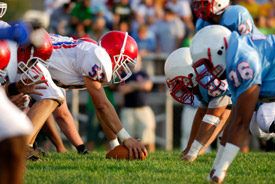 Tears of the anterior cruciate ligament (ACL) can be seriously debilitating knee injuries that usually occur in physically active young people. Injuries are characterized by joint instability that leads to decreased activity, unsatisfactory knee function, poor knee-related quality of life, and can eventually cause osteoarthritis (OA) of the knee. In most cases, surgical reconstruction of the torn ligament is considered the critical method of treatment for a positive turnout, especially in cases where the athlete wants to return to sports. Despite its popularity--at least 200,000 ACL reconstructions are performed at an estimated cost of $3 billion annually in the U.S.--there is a major lack of evidence confirming the effectiveness of surgery. Although structured physical therapy is considered by many to be a vital component of treatment, not all surgeons actually recommend it to patients. To garner a clearer understanding of which treatment option is optimal, a powerful study known as a randomized, controlled trial evaluated which is superior: structured rehab and early ACL surgery or structured rehab with delayed ACL surgery offered only to subjects reporting continuous knee issues.

Subjects aged 18-35 who had suffered from knee injury in the recent past were considered for the study, and subsequently analyzed with a series of questionnaires to determine if they fit the criteria to participate. A large group of 642 potential candidates was whittled down to 121 qualified subjects, which was randomized into 62 for the early-reconstruction group and 59 for the optional delayed-reconstruction group. Rehab was supervised by experienced physical therapists and initiated either before or right at the time the groups were randomized, with goals of improving range of motion, muscle function and functional performance at four levels. Subjects in the early-reconstruction group underwent surgery within 10 weeks after their injury by a senior knee surgeon, while those in the delayed group followed rehab protocol and only had surgery if they chose to do so and met pre-specified criteria. All subjects were evaluated at 3, 6, 12 and 24 months after randomization with questionnaires, with the primary outcome being differences over time in pain, symptoms, difficulty in sports/activities and quality of life.

Scores on the questionnaires showed that both groups experienced improvements over the two-year interval of the study; however, there were no significant differences in improvements between the groups for any of the primary or secondary outcomes (this includes those who eventually experienced surgery and those who remained in the rehab program.) Of the 59 subjects in the delayed group, only 23 actually underwent surgery at an average of 11.6 months after randomization. Since the results show no advantage of early ACL reconstruction, it appears surgery was avoided in 61% of the subjects without compromising the outcomes.


It's just one study

While it may be deduced that for younger athletes, a specific, structured rehab program administered by an experienced physical therapist may be just as effective in treating an acute ACL tear as reconstruction surgery, there may be exceptions. The authors acknowledge, there are a few limitations to this study and as always, further research is needed to investigate additional variables, but these promising findings make it clear that surgery isn't always necessary for ACL tears, which can save dividends in time and money for the entire population.