Physical therapy more effective than advice for low back pain 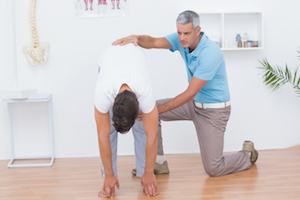 Advanced treatments are needed since condition is complex

Low back pain (LBP) is one of the most common medical conditions in the general population, and it serves as a major cause for disability in people who suffer from it. LBP is also extremely expensive, and most of the costs associated with it are due to injuries that last longer than six weeks, which can prevent patients from going to work normally. Unfortunately, up to 71% of people who experience LBP once will still have symptoms one year later. This shows just how important it is to create treatments that are effective for people after experiencing the first signs of LBP. Advice on how to avoid pain in daily life is considered an important part of treatment for these patients, but more is needed. LBP is a complex disorder that can occur from many different causes, and more advanced treatments are therefore necessary.

Volunteers who had LBP for at least six weeks but no more than six months were evaluated to determine if they were eligible for the RCT. Out of the 2,038 volunteers who were evaluated, 300 fit the criteria and were accepted. These 300 participants were randomly assigned to one of two groups: the individualized physical therapy with advice group or the advice-only group. Participants in the first group attended 10 sessions that lasted for 30 minutes over 10 weeks of treatment. Each patient in this group was then given a specific, individualized treatment program based on their condition. Though each program was different, they all consisted of various exercises to address the patient's pain and problems functioning normally. Participants in the advice-only group attended two 30-minute sessions in which a physical therapist explained the nature of their pain, reassured them that they would improve, and gave them advice on how to remain active without making their pain worse. Participants in the first group also received very similar advice on their condition. All patients were assessed using questionnaires on their pain and activity levels before treatment and then again five, 10, 26 and 52 weeks later.

At the end of 52 weeks, results from the RCT showed that both groups actually improved over time according to the questionnaires. The individualized physical therapy with advice group, however, experienced greater improvements overall. The combination group showed significantly higher activity levels at 10, 26 and 52 weeks, as well as significantly less pain at 5, 10 and 26 weeks. These findings show that while both treatments were effective for patients with LBP, combining individualized physical therapy with advice is even more helpful for patients. Most importantly, this shows that the improvements patients make after 10 weeks of treatment can last for up to one year. It appears that patients with LBP will, therefore, benefit from individualized physical therapy that addresses their problem on personal basis along with advice that can help guide patients further and encourage them along the way.